So here’s a turn up for the books – this week I had my 5000th viewer – which is pretty darn impressive for a year of slightly burned food and bad smells. So thank you for visiting, and coming back for more, it’s great – and to celebrate I will tell you all about the really horrible  meal I cooked at the weekend…

I was pretty intrigued by the concept of a ‘jazzed-up tomato sauce’, I’ve almost made this recipe before, but it takes a bit too long to make after work so it’s waited until now.  I liked the idea of being able to keep the sauce for a few weeks in the fridge, which would be ideal for later work nights.

To feed two people you will need: 200g spaghetti, 250ml olive oil (yes really) 400g tin of peeled plum tomatoes (squash them in a colander until you’ve just got pulp – like in the tomatoey pasta), 10 cloves of garlic (peeled but left whole), and salt and pepper to season. 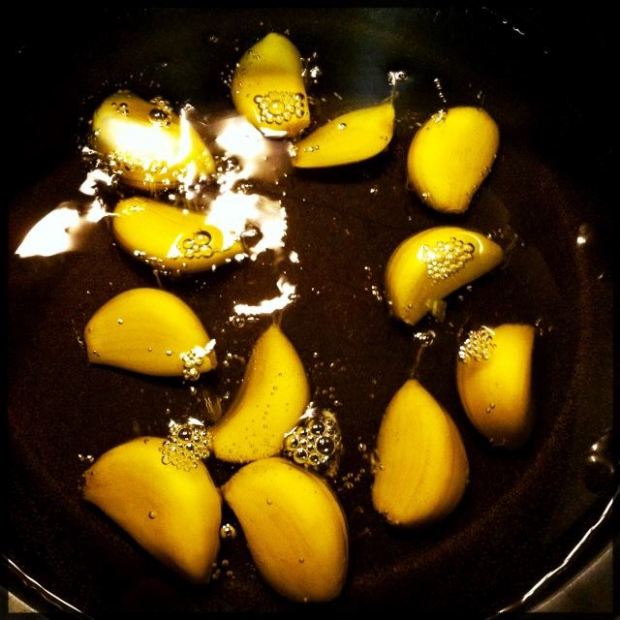 Gently heat the oil in a small pan for about 5 minutes and then add the garlic when the oil is warm.  The book says to keep the heat low so that the oil doesn’t spoil. I’m not entirely sure that this isn’t where I went wrong; my hob is a bit of a flamethrower!  After 20 minutes check the garlic cloves are really tender (give them another 10 minutes if they’re not) and then carefully add the squashed up tomatoes. Turn up the heat slightly and simmer for 15 minutes.

Take the pan off the heat and cool for about 10 minutes.  Transfer the mix to your trusty  food processor and blend into a smooth emulsion.  It’s a little tricky because I found that almost immediately the sauce separated into oil and not-oil which turned out to be a nuisance when it came to the next bit.  Cook the pasta like how it says on the packet, and then drain it really briefly so it’s still a little dampened return it to the cooking pan and add 4-5 table spoons of the sauce and give it a toss.

Serve with Parmesan, and pour the rest of the sauce into a thingie and put it in the fridge.

I wasn’t entirely sure what to think about this, I thought the garlic seemed very subtle, maybe too subtle for my bawdy palette – and then my lover put his fork down and said “it’s just a load of tasteless oil” 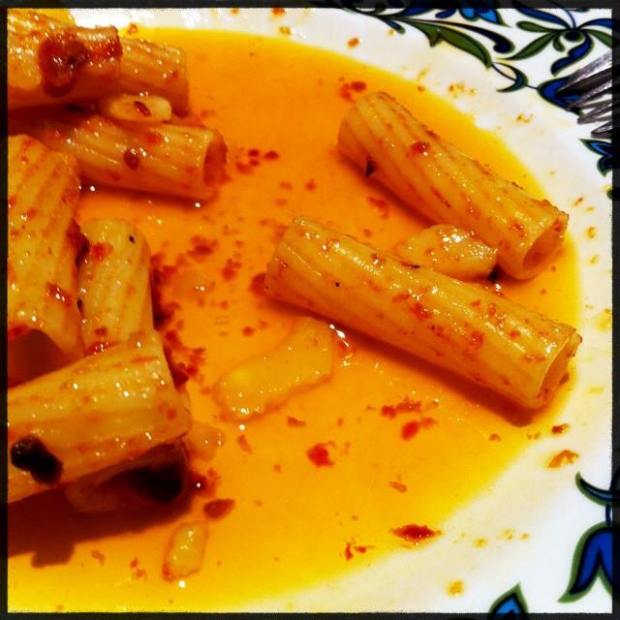 That was me told. It wasn’t very nice, and even the next day when I poured off a bit of the oil and it was more tomatoey it just tasted a bit ‘crisp-n-dry-ish’. Also, I was slightly worried about Botulism from the garlicky oil, but it’s been a few days and nothing’s developed.

There could have been loads of things I did wrong, like not using good enough oil or not garlicky enough garlic, or it might have been too hot, but it wasn’t very tasty so I don’t think I’ll make it again.  Oh well!