Normally when I attempt a recipe I halve it so I have a sane amount of food for me and him.  I’m not sure why I didn’t do it this time… This week, I have mainly eaten moussaka.

It’s been a while since I used the Lorraine Pascale book, not since I burned the quesadillas – so I thought it was time I dusted it off!  I think this is definitely the most complicated recipe I have attempted.

I got pretty confused halfway through making this. I’ve always thought 3 teaspoons (usually 5ml each) was the same as 1 tablespoon (usually 15ml each). So I’m not sure why Lorraine specified 1 tablespoon of cumin, and 3 teaspoons of cinnamon; other than to make me do more washing up.  Also, I don’t know how big Lorraine’s potatoes are, but I got quite big ones and only had enough for one layer.  I’ve simplified the method slightly, because it was pretty confusing. 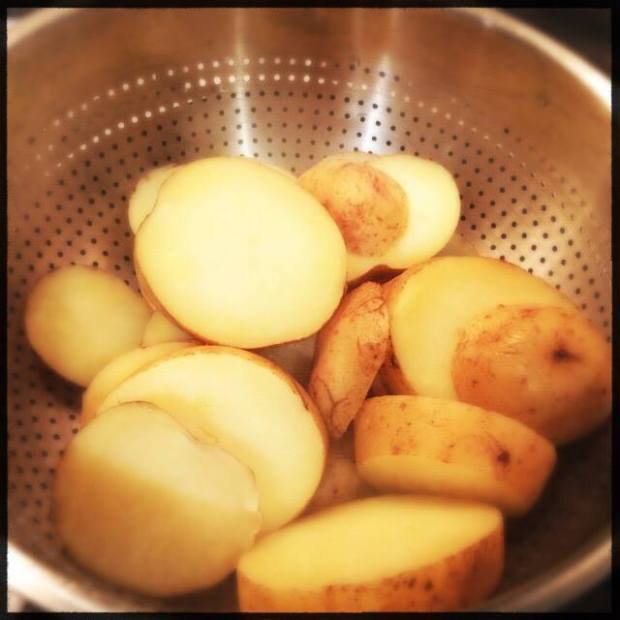 First, wash the potatoes and cut them into 1cm thick rounds, and boil until the potatoes are just tender – this should take about 8 minutes.  When they’re ready drain them and put them to one side until you’re ready for them. 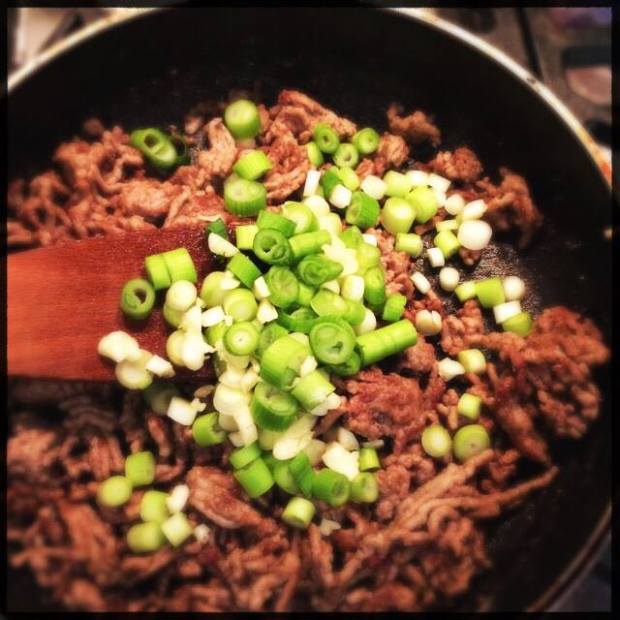 While the potatoes are on brown the lamb (or beef) in a very hot frying pan with a bit of oil, keep stirring it until the lamb has a nice golden colour.  Slice up the garlic and spring onions while you’re waiting for the mince.  When It’s fully browned stir in 2tbsp of flour.

Add the spring onions, garlic, the tin of tomatoes, the glass of wine, the Worcestershire sauce, puree, the cumin, cinnamon, oregano, the little leaves from the thyme, and season with some salt and pepper.  Give it all a good stir and look on a low heat for about 5 minutes. 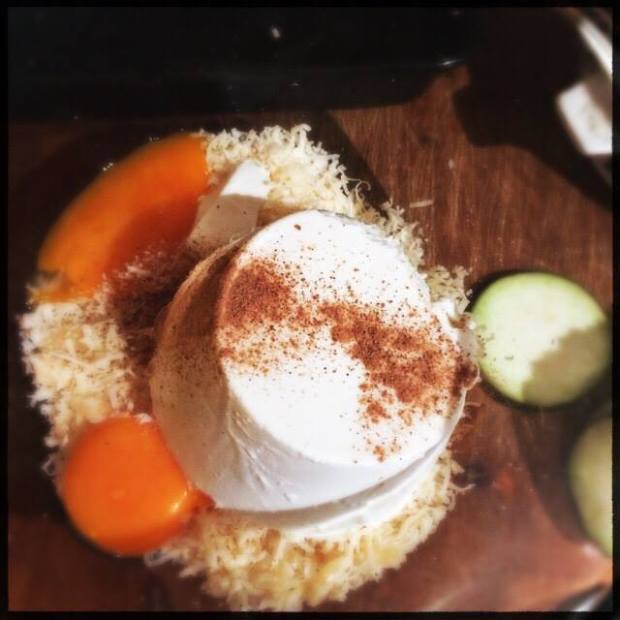 While this is bubbling away make the white sauce.  I would recommend getting pre-grated parmesan.  I didn’t get it and I had to enlist my lover for grating duty whilst I did everything else.  In a bowl mix together the ricotta, egg yolks, nutmeg and most of the parmesan.  Keep some parmesan back to artfully scatter over the top.  Chop the aubergine into 5mm thick slices and lay half of it over the bottom of your baking dish.  Drizzle it with a bit of olive oil and some salt and pepper. 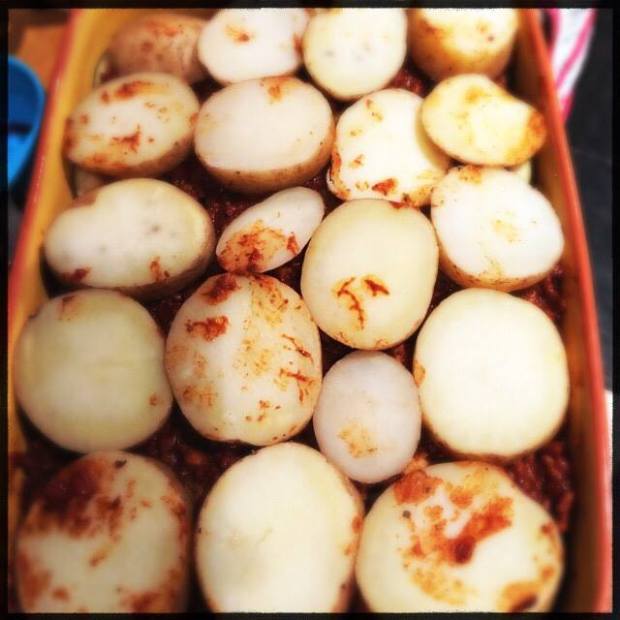 Stick it in the oven for 20 minutes until the top is golden brown.  Serve with salad. 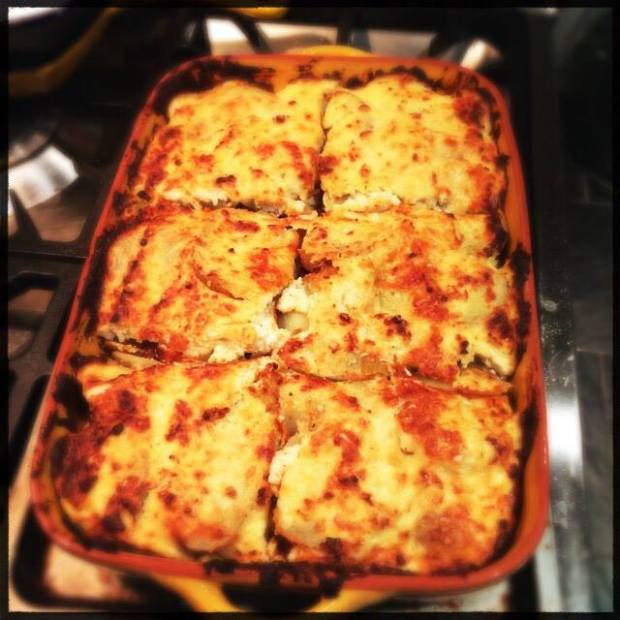 The book also has the recipe for a vinaigrette to go with some watercress salad to serve with this.  Mix 6tbsp of extra virgin olive oil with 3tbsp red wine vinegar and toss it with the watercress salad and serve.  I didn’t toss it, I just put it on the side to pour.  It was quite nice, I’ll make it again. 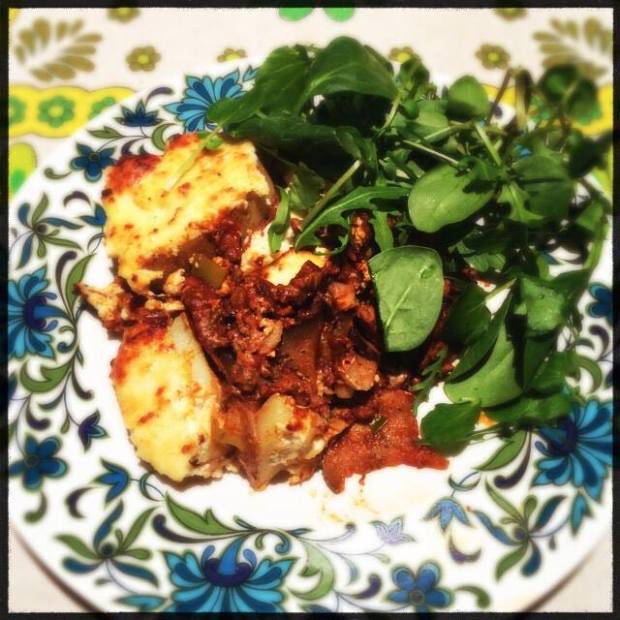 I think it was nice.  It certainly tasted nice but I don’t know if I’ve ever had moussaka before, so I’m not sure if it was a good moussaka… if that makes sense?  I think there was too much Worcestershire sauce for my liking, it over-powered it a little especially after it had been in the fridge over night.  I’d definitely make it again, but I’d make it for when people came for dinner.  I must get more chairs. 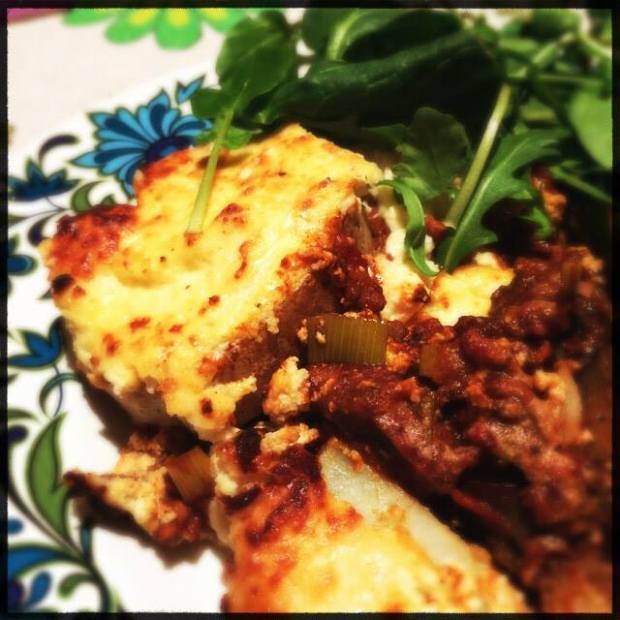 If I’d been more organised with the ingredients this could have been really quick to put together, I managed to leave my kitchen looking like a bomb had gone off in it. 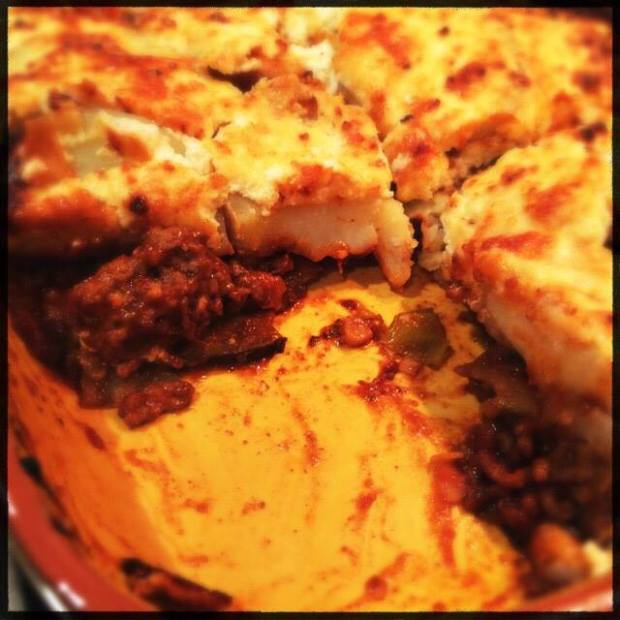 To reheat the the portions of moussaka put it in the oven at 200 for 15-20 minutes, maybe with a bit of foil over the top to stop it burning. 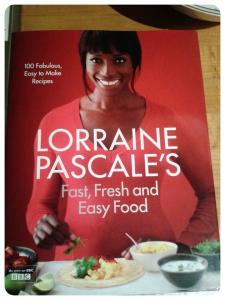