This is a dish that has completely exposed my lack of culinary knowledge.

In my mind I skipped into the kitchen to create a magical roast aubergine on a tomato-y, chickpea-y bed of loveliness.  Actually, it made a slightly spicy version of ratatouille; I had completely skimmed over the line “Like many dishes of its kind (ratatouille, for one)…” and kept the vision of the big meaty spatchcocked aubergine in my mind. 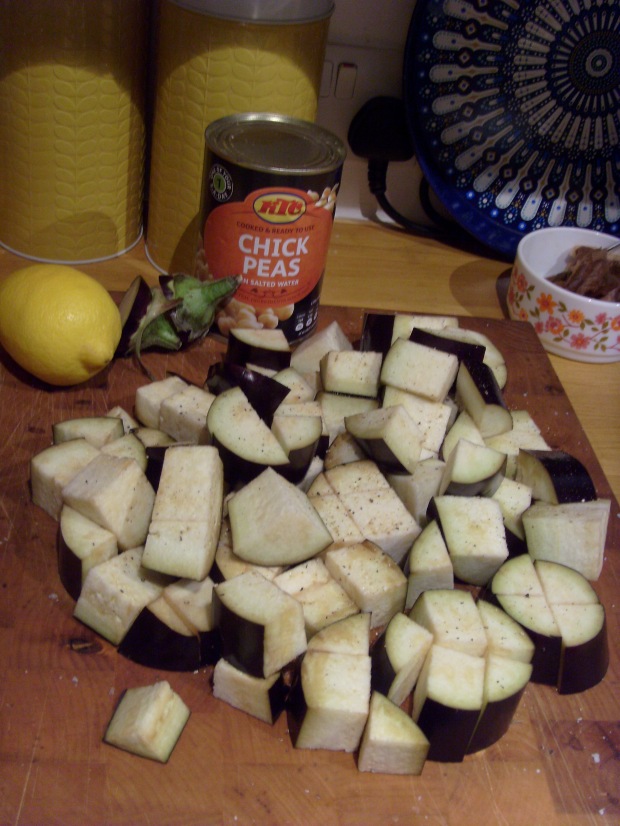 Somehow I held on to my mental image long after I cubed the aubergine… The recipe is another from Hugh Fearnley-Whittingstalls: Three Good Things on a Plate.  I was hoping it would be as tasty as Lentils, spinach, potato (https://newrecipenight.wordpress.com/2014/02/21/week-20-lentils-spinach-potato/) without stinking my house out.

To go with the 650-700g of aubergines (egg plants), the recipe calls for sunflower/rapeseed/olive oil, a cinnamon stick, 350g cherry tomatoes, pinch of chilli flakes, a tin of chickpeas (400g drained and rinsed), 2 garlic cloves and the finely grated zest of one lemon.  As usual, I completely forgot to buy basil or mint leaves.

One thing I didn’t notice when I started cooking this at 7pm was that in total this dish takes over an hour in the oven (200c/gas 6), plus another fifteen minutes cooling time.  My lover’s force ten hunger nearly caused a disturbance to passing aircraft, and I ended up lobbing biscuits at him for the last half hour of cooking.

To start off, heat the oil and then toss the seasoned ( salt and pepper) aubergine chunks into the oil with the cinnamon stick, and put it in the oven for 30 minutes. 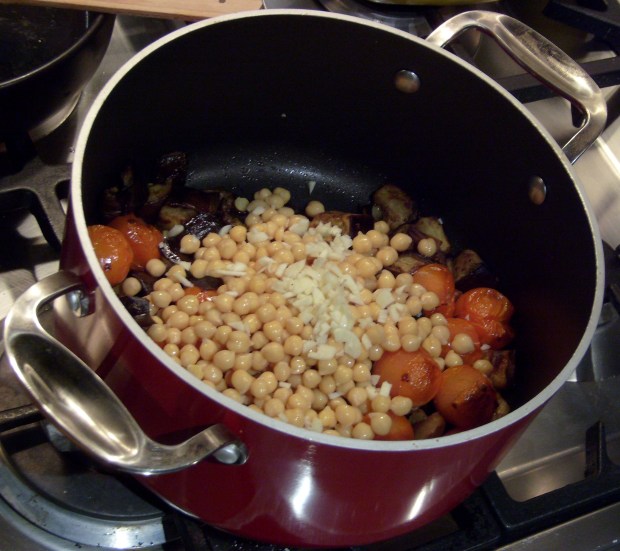 Add the cherry tomatoes and chilli flakes, and roast for another 20 minutes.  Drain the chickpeas and chop the garlic up small and put it back in the oven for the final 10 minutes.

Grate the lemon zest and stir it in and leave to cool for 15 minutes.  I served on warm pittas but Hugh also recommends rice and green salad (which I also forgot to buy)

I can’t tell if it was the hanger talking, but halfway through his plate of aubergine-y ratatouille my lover turned to me and said “don’t make this again.”  A bit harsh I think… it was ok, I wasn’t crazy about it, but maybe with a nice steak or some chicken/duck and a peppery salad it would be lovely.  If I make it again it will either be for my mother  or if I ever do a hot buffet.  Sorry Hugh.