That wasn’t a dig, just a statement.  I would have posted the bits I was going to post sooner than now, but the laptop is kept all the way over there and the cookery books are only over there… I’ve been analogue for a week through pure laziness.

For this post I would like to ask when the urge to use up leftovers goes too far.  The example I would like to use is the bread and butter pudding I made the other week.

I must have brought my Sainsbury’s tiger loaf during the wrong faze of the moon or something.  I got about 2 slices off it for my lover’s lunch on the Tuesday, and when I went to cut it for Wednesday’s lunch it was a tad tough.  He text to say he’d cut his gum on the crust, and that the bread was jolly hard and I should buy new bread.

So I looked at my 3/4 tiger loaf and decided it was far too much to throw away, and I’d get judged by the Yummies at the park if I lobbed it at the ducks (white bread makes ducks sink in West London)… So I decided the only way to use up the bread would be to make Bread & Butter Pudding with it. 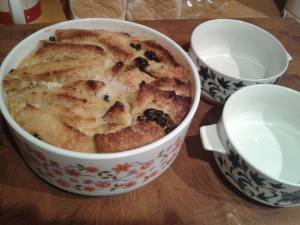 I think it might have been a false economy.  Firstly, I panicked at the thought of whisking everything together by hand – and ran down to Argos and bought a whisk.  It’s not a very good whisk, and it makes a funny smell above speed 3.  Of course, then I had to go out and buy 300ml of double cream, a pint of whole milk and 6 eggs.

It was ok, I’d never had Bread&Butter Pudding before, and this recipe from the Hairy Bikers Mum’s Know Best book was nice with the cinnamon (which I got everywhere), but I think next time I’ll just throw the bread away (or feed the ducks).  I also need a better dish – the one I found was too tall and narrow and the middle of the custard didn’t set so it was a bit soupy in the middle.

I might start making a different ‘new-old school pudding’ each month, because I’ve never really made pudding before.